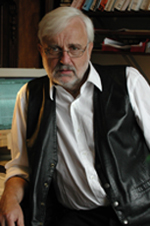 Hans J. Kleinsteuber was professor of Political Science and Journalism at the University of Hamburg, Germany since 1976 and head of the Research Center for Media and Politics. Before that he studied in Berlin and the USA. His research work included media politics, economics and technology in Germany, in a comparative perspective and in a global scope. He has been member of the EMRG since 1980. He was member of the Broadcasting Council of Deutsche Welle, the international broadcaster of Germany. Hans died in February 2012.